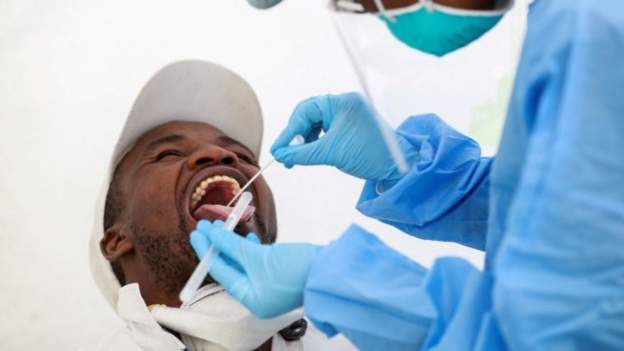 “Aggressive and bold” action is needed as Africa’s coronavirus cases pass the one-million mark, according to the African Union (AU) body dealing with the pandemic.

It says South Africa – where testing has been widespread – accounts for more than half of all cases.

“Aggressive and bold” action is needed as Africa’s coronavirus cases pass the one-million mark, according to the African Union (AU) body dealing with the pandemic.

It says South Africa – where testing has been widespread – accounts for more than half of all cases.

Tanzania’s lack of data meanwhile is a “concern” for the AU.

Experts say a lack of comprehensive testing across Africa means the true extent of the pandemic is not known.

Tanzania, for example, has not published figures for weeks and in early July its health minister said the virus was “heading towards an end”.

Why is there a surge in South Africa?
How African generosity dried a teacher’s tears
Coronavirus in Africa data tracker
“We continue to reach out [to Tanzania] but we’re not having the right responses,” director of the AU’s Centres for Disease and Control (Africa CDC), Dr John Nkengasong, told the BBC.

Africa’s first coronavirus case was confirmed in Egypt in February – three weeks after Europe, and two months after the outbreak began in China in December.

Where are Africa’s hotspots?
The two countries with the highest numbers of cases are South Africa and Egypt. They accounted for 75% of all the new cases reported by mid-July.

South Africa has the highest recorded number of total cases and reported deaths, and make up more than half of all the cases in Africa.

You may also want to watch:

Media captionCoronavirus in South Africa: A day in the life of a contact tracer

More than 65% of Africa’s 55 countries have reported fewer than than 5,000 cases, Africa CDC says.

What is being done?
African nations have been praised for locking down more swiftly than other parts of the world.

But there are concerns about insufficient testing, and the Africa CDC admits this should be expanded along with tracing.

“We know that wearing masks constantly will help this situation,” he added.

A coronavirus vaccine developed by the University of Oxford and tested in South Africa, the UK and Brazil, appears to be safe and triggers an immune response.

But it is still too soon to know if this is enough to offer protection and larger trials are under way.

A milestone and a mystery

This is a significant milestone and an alarming one. But it is also a mystery.

More than 500,000 cases of Covid-19 have already been confirmed in South Africa alone. The country has good data and – compared with most of Africa – a huge testing operation under way.

So, is it really possible that there are only another half a million cases across rest of the entire continent?

The short answer is no.

Experts here agree that, given the minimal amount of testing it is almost certain that Africa has already sailed far past the one million mark.

But doctors also point out that hospitals in many countries are not yet overloaded with suspected Covid-19 cases.

There are many possible explanations: fear of going to clinics, early lockdowns in many countries and sparser populations.

And because there is still so much to learn about Covid-19, it is possible that some populations may enjoy some extra protection against the virus, perhaps because of immune systems already bolstered by previous battles against malaria, cholera and other diseases.

Thanks for subscribing!
Tagged Ghanaian News