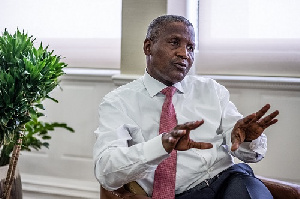 On a peninsula east of Lagos, 30,000 workers are employed on a project that holds out the promise of transforming Nigeria’s economic fortunes.

It’s here that Aliko Dangote, Africa’s richest man, plans to spend more than his net worth of $13.5 billion building one of the world’s biggest oil refineries. If he succeeds, he could end the irony of Africa’s biggest oil producer importing $7 billion of fuel a year, and instead see it meeting its own needs and supplying neighboring nations.

The collapse in the oil price and Nigeria’s woeful track record on industrial projects are significant risk factors.

Yet Dangote’s bet has the potential to revolutionize Nigeria’s economy, with its operations adding $13 billion, or 2.3% to the gross domestic product, according to a 2018 estimate by Renaissance Capital. Central Bank Governor Godwin Emefiele has said that the project could employ more than 70,000 people when operational.

“Yes, the risks are high, the challenges are high,” said Devakumar Edwin, chief executive officer of the refinery complex, who’s worked with the billionaire for about three decades. “But the rewards are also high.”