The government of Colombia has offered a reward of 200m pesos ($53,000; £40,000) for information about the killing of eight people in south-western Nariño province.

Four gunmen burst into a party held at a house in Samaniego on Saturday and shot dead seven men and one woman.

The victims were part of a group of about 20 revellers.

The motive for the attack is not clear but there are a number of drug gangs active in the border area with Ecuador.

What is known about the attack?

Survivors of the attack told El Tiempo newspaper that some of them had received threats on Saturday warning them to stop the party they were attending on the outskirts of the town of Samaniego.

The group said they had decided to organise the party after an annual music festival was cancelled due to the coronavirus pandemic.

Some received messages over WhatsApp telling them to stop and minutes later, four armed men burst onto the property on motorbikes and opened fire.

Who are the victims?

Most of those killed had either just graduated from high school or were at university.

The only woman to be shot dead, Laura Michel Melo Riscos, was planning to study medicine. Óscar Andrés Obando Betancourt was studying sport in the city of Cali.

Carlos Patiño, the father of Bairon Patiño, another of the young men killed, said his son had been attending the party with his girlfriend, who survived the attack.

“She told us that she survived because she played dead when the shooting started. The others who managed to get away, about 20 of them, were either in the kitchen or were able to run away, but all of those in the courtyard were shot dead,” Mr Patiño said.

Mr Patiño dismissed rumours that the shooting may have been a settling of scores between rival criminal or drug gangs.

“Those youths were decent youngsters, sporty and hard-working,” he said. He added that his son played in the local five-a-side football league.

Murder rates have fallen since the government signed a peace deal with Colombia’s main rebel group, the Revolutionary Armed Forces of Colombia (Farc), in 2016. 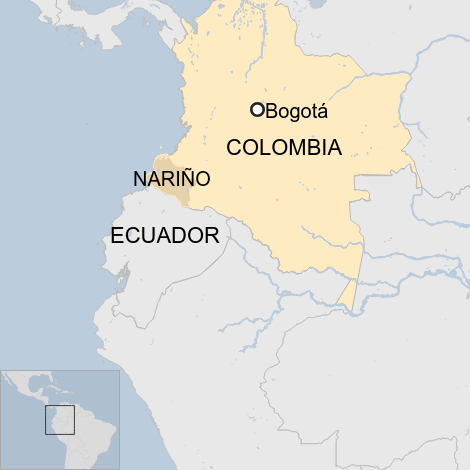 2019 had among the lowest number of homicides since 1975, according to figures from Colombia’s ministry of defence.

But breakaway factions of the Farc remain active in rural areas of the country, where they engage in extortion and drug trafficking.

The country’s second-largest rebel group, the National Liberation Army (ELN) is also still active as are a number of right-wing paramilitary groups originally founded to fight the left-wing rebels.

Despite the fall in homicide number, human rights and land rights activists have been killed by their dozens.

But armed attacks such as on those gathered in Samaniego are unusual and reawaken memories of darker times in Colombia when its armed groups would carry out mass killings, especially in rural areas where there was no or little presence of the security forces