Jerry John Rawlings, who was Ghana’s first President under the 4th Republic, says that he served Ghana with a team which comprised various experts with different political affiliations and with unique talent and intellect. 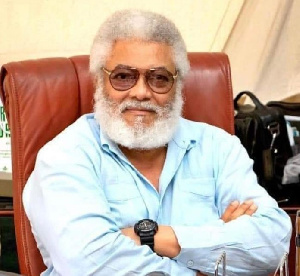 Jerry John Rawlings, who was Ghana’s first President under the 4th Republic, says that he served Ghana with a team which comprised various experts with different political affiliations and with unique talent and intellect.

According to him, as a young Air Force officer in his twenties, he travelled across the country with his colleagues and the realities on the ground really shocked him.

Rawlings recalled an incident in the Yendi market where they had gone to purchase some local produce.

He narrated that he noticed old men selling beans, sorghum, etc., and placed close to their legs were containers with a brown-looking fluid. When he enquired, he was informed that the dirty-looking fluid was their drinking water.

Rawlings, in a statement trying to debunk some allegations levelled against by Prof. Kwamena Ahwoi, in his book ‘Working with Rawlings’, indicated that he felt pained knowing that urban folk were so privileged that they were able to “flush their toilets with clean water from the taps while those in the rural areas drank Guinea-worm infested water. Accept it or not, this was our reality as a nation. How could these experiences not have sparked a vision or a philosophical outlook in this young pilot’s head?”

His statement, signed by his communication officer, added: “Even more disturbing was the fact that large patches of Ghana were without lights when he flew at night. His perspective began to take a more serious tone as he recognized the reality on the ground and the fact that without electricity and water, the populace would be living an unhappy and distressing substandard existence, while urban dwellers remained out of touch with the reality on the other side of the country.”

Thanks for subscribing!
Tagged Ghana news