Former President Flt. Lt. Jerry John Rawlingshas detailed one incident at Afiadenyigba between Nana Konadu Agyeman-Rawlings and Ernestina Naadu Mills, former first and second lady respectively, which Prof. Kwamena Ahwoi has stated in his book Working with Rawlings that, it was the main reason Rawlings fell out with his vice president Prof. J.E. Atta-Mills. 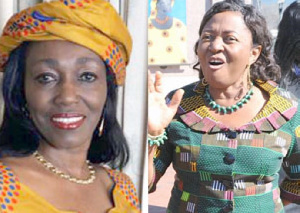 Former President Flt. Lt. Jerry John Rawlingshas detailed one incident at Afiadenyigba between Nana Konadu Agyeman-Rawlings and Ernestina Naadu Mills, former first and second lady respectively, which Prof. Kwamena Ahwoi has stated in his book Working with Rawlings that, it was the main reason Rawlings fell out with his vice president Prof. J.E. Atta-Mills.

Prof Kwamena Ahwoi wrote that he was summoned by President Rawlings to the Castle sometime in April 2000, and there Rawlings “threatened to disown and disinherit Professor Mills as the NDC’s Presidential Candidate for some ‘insolence’ that Mrs Mills had shown to his wife, Nana Konadu at a political event at Afiadenyigba in the Dangbe East District of the Greater Accra Region, and which Nana Konadu had reported to him.”

But Rawlings in a statement Wednesday explained the incident thus: “In 2000, Vice President Mills had been confirmed as the candidate for the NDC. Nana Konadu, as part of her political campaign for the Party, created a programme for the Greater Accra Region. One of the events was the opening of a school in Afiadenyigba, Ada, which she invited Mrs Mills to commission; to officially outdoor her to the Dangbe community. Although protocol arranged for the First Lady and Vice-President’s wife to travel together, Mrs Mills decided to take the lead on the journey.

Whilst serving as Head of State in the 1980s, J.J. Rawlings, [….]always insisted that in attending public events, none of his officials including himself would alight from their vehicles from their periphery and would not drive into durbar grounds, “thereby whipping up dust onto the chiefs, royalty and the community”.

He went on: “When Mrs Mills arrived at the durbar grounds at Afiadenyigba, her convoy in an attempt to drive onto the sandy durbar grounds was frantically flagged down and stopped by a police officer assigned to the function. Mrs Mills in a fury demanded the reason for this. The police officer proceeded to explain the rationale for stopping her car which unfortunately did little to defuse the situation and she said she was leaving. The 31st DWM ladies that organized the event frantically went on their knees to apologize to the Vice-President’s wife and begged her to stay. This was in full view of the chiefs and people gathered.”

Rawlings further explained: “Nana Konadu eventually arrived at Afiadenyigba to the sight of some elderly organizers on their knees, pleading, with Mrs Mills who was clearly upset. Nana Konadu enquired as to what had transpired and was briefed by her organizers. In an attempt to de-escalate the situation, Nana Konadu apologized to Mrs Mills on their behalf and explained that all manner of hiccups occurred at public events but that should not bother her. When Nana Konadu proceeded to greet the chiefs and people present, she was met by shocked chiefs, queen-mothers and their subjects, all of whom could have been located to corroborate the incident, was the author so inclined?”