Widows wept beyond control in front of their children in the Upper East Region on Wednesday as some angry customers of the Gold Coast Fund Management heaped blame on President Nana Addo Dankwa Akufo-Addo for a decision that has caused their investments to be locked away from 2018 to date.

The angry depositors, dominated by pensioners wearing red headbands with scarlet ribbons tied to their wrists, voiced their tortures at a news conference held at Navrongo, capital of the Kassena-Nankana Municipality.

A retired educationist, Dominic Atatoga, set the tone for the all-red gathering as he told the audience in his welcome address that the news conference had to be convened after it became clear that the “powers that be were dodging us and silence was not going to help us.”

“I deposited my money there so that I could be doing withdrawals little by little to take care of my children. I have been evicted with my children from the house we used to live in. I can’t pay house rent. My husband died leaving me with the children to take care of. The money has been locked up for [two] years, accumulating interest. They don’t want to give me my money. There is no work to do,” Akombasam Awedana, speaking Kassem and Twi, narrated with tears in front of cameras.

Another woman, Alice Bapuuroh, raged in a speech punctuated by sighs from the distressed-looking crowd. “When two elephants fight, it is the grass that suffers. Why must we be those to suffer? Innocent widows. Innocent children. He (President Akufo-Addo) should be the one to have been wiping our tears. He shouldn’t let innocent widows be crying. Innocent children cannot go to school because the little we have saved is lying somewhere we cannot reach,” she said.

Many pensioners have died; our thumbs will matter tomorrow— aggrieved depositors

The Chairman of the Aggrieved Customers of the Gold Coast Fund Management, John Brown Chiravira, delivered an emotional statement at the press confab that brought together heartbroken clients from both the Kassena-Nankana Municipality and the next-door Kassena-Nankana West District. 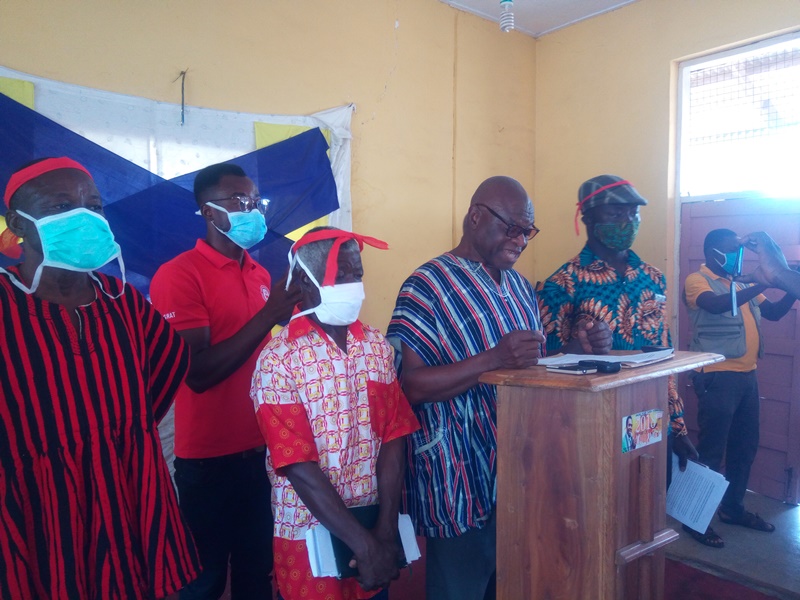 “Ghanaians will recall that the government revoked the licence of Gold Coast Fund Management in October, 2018, with the view to reform the financial sector. Depositors were assured of the safety of their monies and that the purpose of the financial sector reform was to clean up the system. The Security and Exchange Commission, through the Consolidated Bank, collected data and acknowledged receipt of claims and gave a contact number 0302963188. During the State of the Nation Address this year, the President emphatically stated that payments would be done soon.

“Given that almost two years now nothing has been heard so far, depositors who are mostly pensioners, businessmen and women are now financially distressed. Many pensioners have lost their lives because they could not meet the cost of medication and shelter. Many businesses have collapsed. According to the Alliance for Social Equity and Public Accountability (ASEPA), less than 5% of customers of Fund Management Companies have actually been paid,” said the Chairman.

Going further, the statement pointed out: “If the above is true, why should 95% be left to suffer? 5% of 800,000 is 40,000. This represents the cream (elite) of society whose voices can be heard and need to be silenced for now. This is discriminatory. Remember, Mr President, you are under oath to do good to all manner of persons. The voiceless majority of 760,000 who do not matter today would matter tomorrow since they have thumbs on the 7th of December. Those who exited this world untimely for want of money to treat themselves will be witnesses in heaven and those gnashing their teeth now for the collapse of their businesses are silently appealing to the good Lord for revenge. The good book says, ‘Vengeance is the Lord’s’, and so be it.”

The statement the Chairman presented also highlighted a change the disappointed depositors said they had noticed in President Akufo-Addo.

“We can recall, Mr President, that you were a serious advocate for human and equal rights. But today, we are not seeing that advocacy in action. We think government can do better to salvage its image by paying us our monies,” conveyed the statement.

As the crowd chanted repeatedly inside an auditorium, “We need our money now!”, one of the disgruntled retirees, wearing a red hat, ran unexpectedly from his middle seat with an already-opened old book and held the book firmly above his head in the display for the entire gathering to see.

“The National Pledge. I promise on my honour to be faithful and loyal to Ghana, my Motherland,” he read out from an opened page in the book with flames of anger in his eyes. The literate participants in the hall recited the line unrehearsed with him as he read. Then, he asked, “Is the President going by the Pledge of the nation?”

“No!” chorused the charged crowd. “Not at all,” a lone male voice added from a corner in the hall.

A young man called Francis Bugase took over the stage subsequently, making it clear as the saddened crowd interjected his message throughout with a mantra of approval: “We want to also add that, devoid of any political party that any of us belongs to, we have to put our money first. We need the money now. We want this message to get to the President today that we have our thumbs and it was these thumbs that voted him in the year 2016 and we are still keeping the thumbs. 7th December is coming. Whoever will pay our money is the person we are voting for!