You are a hypocrite – Owusu Bempah slams Agyinasare

Reverend Isaac Owusu Bempah, leader of the Glorious Word Power Ministries has launched a scathing attack on Bishop Charles Agyinasare over his criticism of the Akufo-Addo government.

You are a hypocrite – Owusu Bempah slams Agyinasare 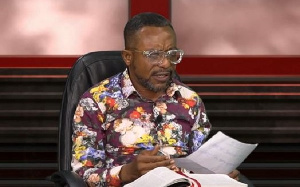 Reverend Isaac Owusu Bempah, leader of the Glorious Word Power Ministries has launched a scathing attack on Bishop Charles Agyinasare over his criticism of the Akufo-Addo government

Agyinasare has been in the news lately for some proclamations he has made on national issues.

Notable among the issues is the banking sector crisis where he accused the government of deliberately killing Ghanaian companies.

In an interview with Okay FM, Owusu Bempah accused Agyinasare of peddling falsehood and making uninformed statements about the matter.

“It hurts that Agyinasare is saying Akufo-Addo is collapsing jobs. What he is saying is not true. What I know is that some of the people did not even have the required capital to set up banks. So the president through the BoG governor asked the banks to consolidate.”

“Even the savings and loans which were collapsed, the government has paid most of them. The president couldn’t sit and allow such things to happen. Had the president not intervened, it would have been difficult to withdraw monies from the banks. So if Agyinasare is saying Akufo-Addo is killing jobs, respectfully, I disagree”, he said.

Owusu Bempah further quizzed Agyinasare on his silence during the dumsor era.

He alleged that in the build-up to the 2016 elections, Agyinasare and Korankye Ankrah anointed and prophesied victory for John Dramani Mahama.

“Agyinasare, you journalists have turned into three monkeys who do not see or hear the ills of the Akufo-Addo government. He did not speak well. During the dumsor and all the things that happened, I never heard a word from Agyinasare. Was he a monkey then? Was he a dead dog during Mahama’s time?”, he questioned.